in memory of Dieter Gartmann 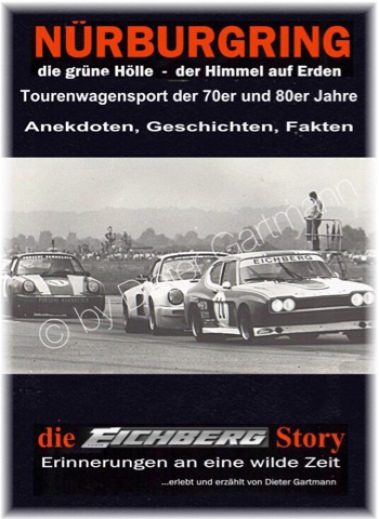 EICHBERG-Story - memories of a wild time... seen and told by Dieter Gartmann

A few remarks from my side: told You long before in my blog, that I didnt´t had the courage in the 90s to join the touring-car sport by myself - Dieter was a guy, I´ve known from my childhood-days... When I heard, that he started to publish his stories - then started a loose contact within a few beautiful ebenings in his motorsport-cellar ot, togehter with him and my dad on his terrace in Bad Iburg. I´ve "eaten up" his three books and there is often a time, take one of the books and read a few lines...

In winter-time 2013 I had the idea to publish Dieter´s texts on my blog - Dieter was exited and I started... Now the publicartion on my new homepage 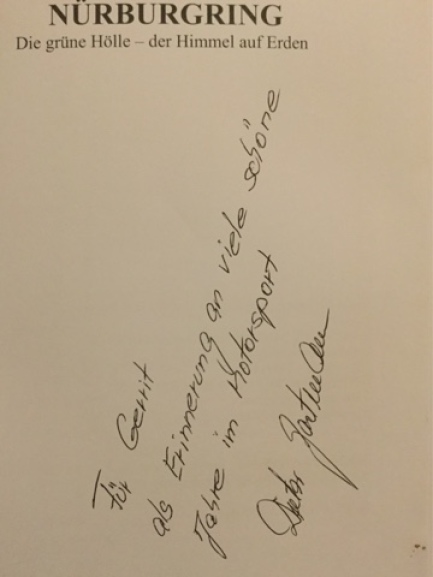 personal dedication in the second book 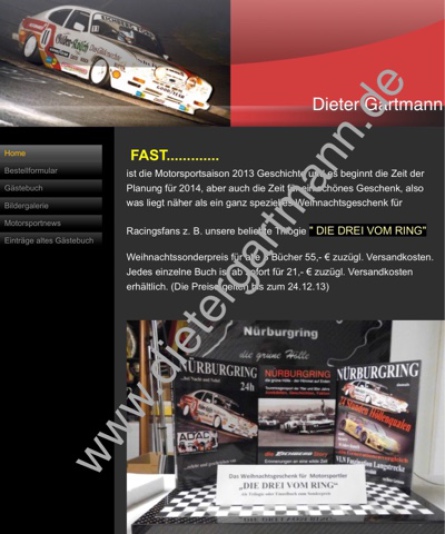 on his website www.dietergartmann.de you have the possibility to buy all three volumes for sale

But now a few excerpts from the second book by Dieter Gartmann ...

Start - at the first race on the ring equal the first victory!

"Sometime, we wrote the year 1971, it was so far. The first attempt at the start of a circuit race at the Nürburgring was a reality. It was the ADAC 2 hour race, which was carried out on the then still intact "Südschleife". After an eventful race with some sheet metal contacts, I was hardly, I think, wiped to position 3.
After the two had been disqualified with their colleagues, I was able to return home with a winner's crown after my first assignment on the Nürburgring. "

"The early 1970s in the motorsport were dominated by 2 liter engines, which came from the Formula 2 as 4-valve from BMW and FORD and pushed these vehicles huge thrust. [....] The Touring Car Championship from 1970 to 1973 was still dominated by the Capri RS, but from 1974, the dog bone escort BDA regularly appeared in the results lists.

Legendary pilots from all countries gave themselves in the escort a tryst. In Germany there were names like: Hans Heyer - Dieter Glemser - Klaus Ludwig - and many more. "

"Somewhere in the north of Germany, in the small sales and cashroom of a "Westfalen" petrol station are three apparently slightly disturbed types. One comes at some time to the adventurous idea, but simply to build a racing car self-government, thereby the established prominence a little Ha, ha, ha!

But the guys could not be too much disturbed, because this crazy idea soon became a concrete plan. Of which three "easily disturbed" Dieter writes here?

So I have presented you the staff of EICHBERG RACING and so it goes to the construction of the Escort BDA - what do you need for it first? Right, a Ford Escort ...In a barn you were then found and a Ford Escort 1100 with 40 HP changed for 500 DM the owner ...Each free minute the small team put into their object and so gradually grew a slimy, ugly escort 1100 "dog bone" to a real FORD EICHBERG BDA ...

... in the late summer of 1973 came the long and hot moment when Helmut Eichberg operated the starter - he ran ... and how!

After the first try, one of the first Nordschleife operations in 1975 with an unpredictable outcome ...

"... we went again towards Adenau, this weekend we had nice weather, the Nordschleife radiated, all training sessions ran smoothly and in qualifying I came to a considerable 8th place.

When the starting flag fell at 2 pm on Sunday, about 60 cars went into our division. I had fought with our "fat" up to bridge "Breidscheid" in position 5 and was relatively alone in the area of ​​"Hohe Acht".

After many hundred laps, the rider knows that you have to get full throttle. Even if your inner pig dog and your self-esteem drive constantly signal you - from the gas, from the gas! -

This is, by the way, one of the many places on the ring where the chaff separates from the wheat. If you do not come behind the top of the rubble, you were just too slow! "

However, this little adjustment brings us back to the actual race.

"I've been merged to a single unit with my fat, and I've always taken this cock Eschbach full in the third place, and the next landing on the rubble stones, where the rear wheel is extremely loaded, happened The result was that my left rear wheel together with the brake disc, saddle, wheel bearing [...] catapult-like, as a space station left my escort and over the spectators in the eternal forests of the Greens [...] Since we were in the first round, there came about 60 wild heaters with their flying crates behind me, for which I worked like a road barrier, but of course they were working immediately Could not avoid that my dear colleague Andreas Schall with his black Liqui Moly BMW first flew into the Brünnchen. And had to decide quickly, me

a) to drive into the doorway or

b) trying to get past my car

There was once again a huge blow and I was escaped with my escort about 20 meters [...] In hindsight, I must be thankful to Andreas Schall, that he has opted for variant b). [...] An eyewitness told us later that it was at the accident site, as if a small aircraft had crashed. " 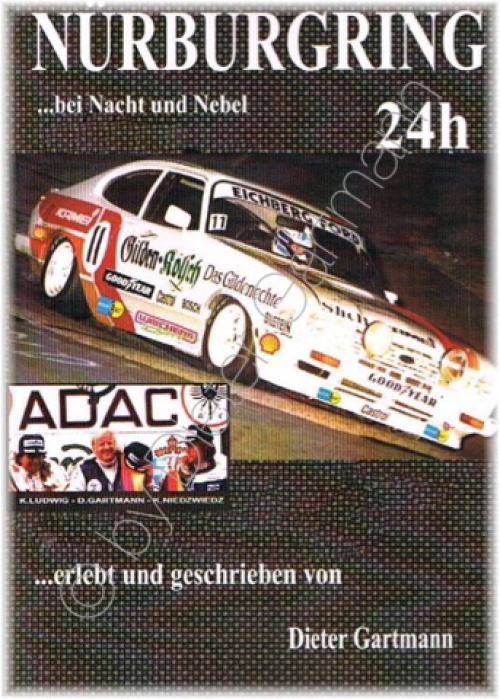 First book with lots of memories - even my das is mentioned a few times and I almost came to tears when Dieter told me at our first meeting: "Gerrit, although your dad and I were competitors, so I always have him as a fair sportsman In memory "- legendary the story around the short-term from Bad Iburg" flown "exchange engine, which has arrived overnight in Zolder ... But I do not want to anticipate too much ...

The third book was the absolute hit. Dieter, the memories have not gone out and in this book he compares "at that time" with "today". It was something else to win the 24-hour classic in the last year of the year. I do not want to play down the performance of today's "Nordschleife-artists" - but there was something else - no "little" helper on board - no hospitality tent Behind the pit lane - the box crews mostly from volunteers and family members ... 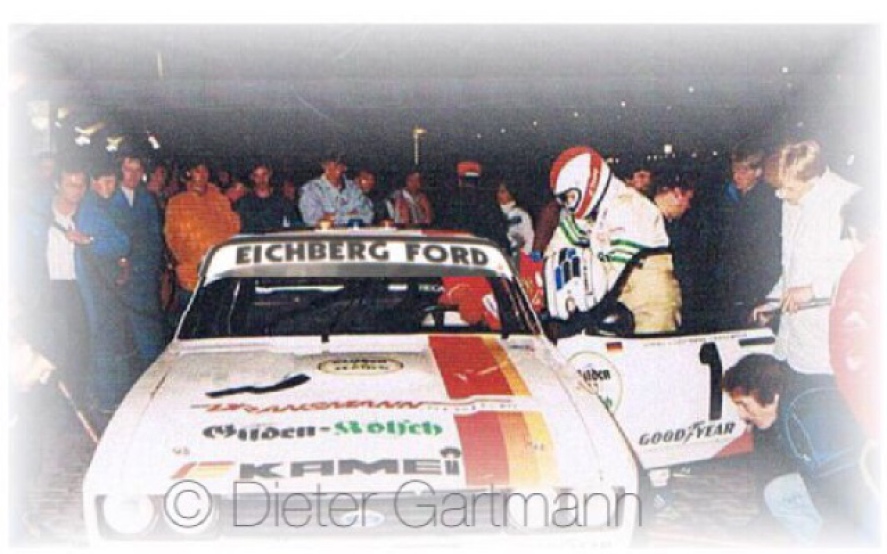 All in all, the Nürburgring is no other racetrack comparable. Perhaps spa in the Belgian Ardennes.

Dieter Gartmann had a dream come true with the motorsports and was in the wild 70s and 80s live behind the steering wheel. The team around Helmut Eichberg spat the established teams like Zakspeed or Schnitzer relatively often "in the soup" ... 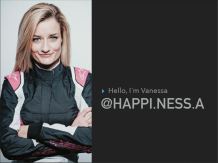 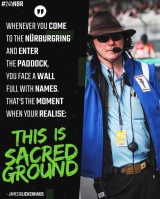 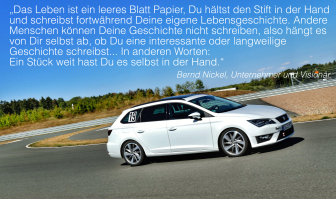 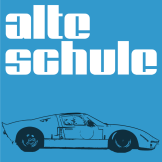 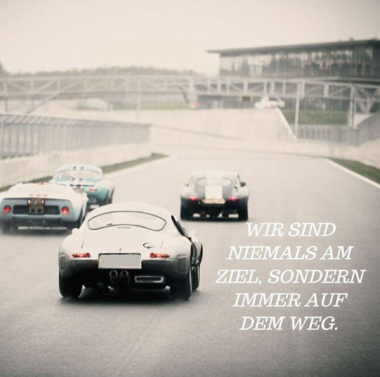 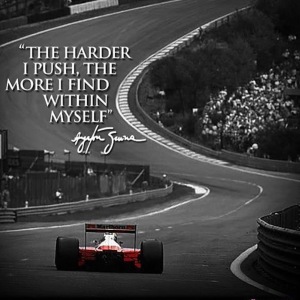 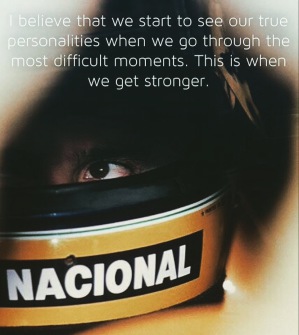 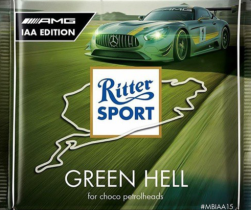 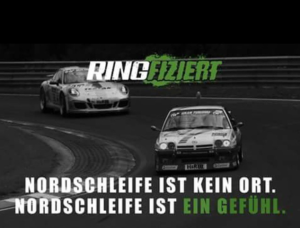 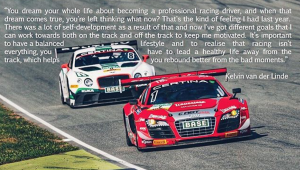 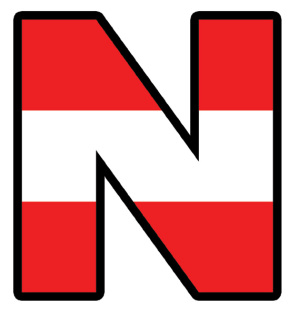 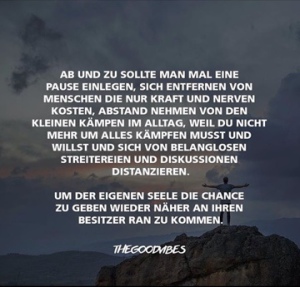 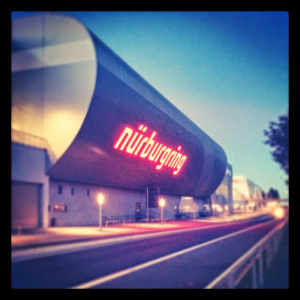 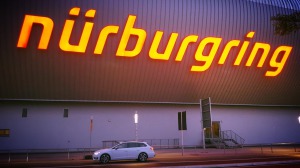 "If You didn`t take a picture of Your car with this Nürburgring-sign in the background, You´ve not been there" 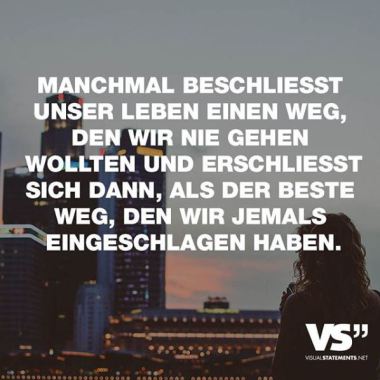 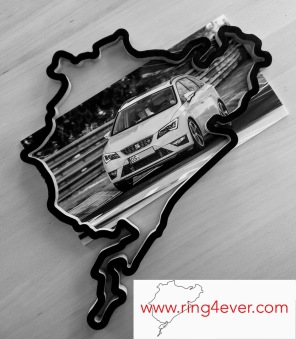